Creepy Movie Doors No One Should Open 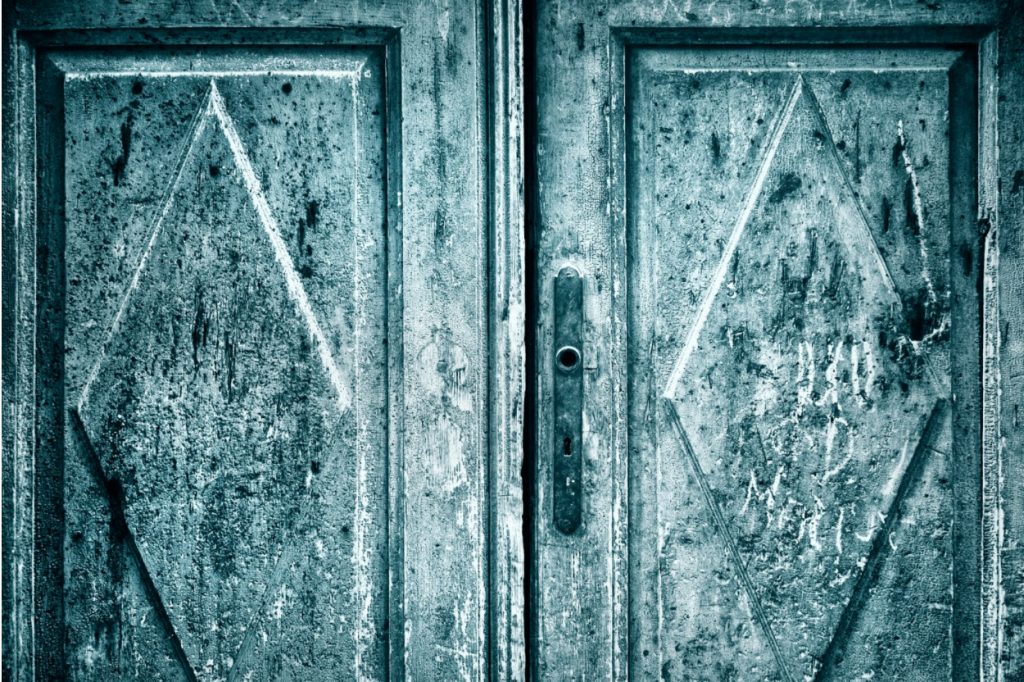 Creepy Movie Doors No One Should Open

It’s that time of year where crisp and sometimes chilly dark nights and bare wooden branches bring an eerily charming thrill to cozy evenings. Now is the perfect time to park in front of the TV with hot apple cider and a horror flick, and next time you do, pay attention to the freaky doors that lead to everything unholy in suspense and horror films. Fantastically scary entrances set up scenes so fluidly that they are often overlooked. These scary movie settings are critical elements in scenes that build the most suspenseful moments in film. Check out this list of creepy movie doors that no one should ever open.

Thornewood Castle is chalked full of spooky entrances in this famously creepy castle that was the set of Stephen Kings 2002 TV miniseries, Rose Red. Construction of the castle was completed in 1911, and the marvelous oversized oak doors and glowing red windows set the scene for the house that has gone insane and grows on its own.

The audience is introduced to the daunting door of Thornewood Castle when the main character, Parapsychologist Dr. Joyce Reardon (Nancy Travis), gathers a team of psychics in the castle’s front yard and prepares to walk inside. The team looks anxiously at the large doors and the massive red brick structure behind it as they enter the premises. What awaits them is an evil force that none of them expected to encounter.

The great thing about living in the modern technical age is that frightening architecture can be real or made with Computer Generated Imagery (CGI). Disney’s 2003 supernatural horror comedy film starring Eddie Murphy had a spiderweb theme, intimidating gargoyle faces embedded in the doors, and a glorious creaking sound. The architecture was Renaissance-influenced with a touch of southern charm along with Dutch-colonial revival architecture.

When the Evers family (Eddie Murphy, Marsha Thomason, Aree Davis, and Marc John Jefferies) arrive at the castle, they linger at the spooky door before it swings open on its own. If you want to see similar doors in real life, the Haunted Mansion is on display at Walt Disney World’s Magic Kingdom.

The remake of the original 1976 movie The Omen was shot with a backdrop of some of the most gorgeous cathedrals across Prague, the Czech Republic, and Italy. From the Gothic-inspired London flat to the Theological Hall of the Library in Strahov Monastery, any door that you choose to enter in this movie leads to the devil incarnate.

Kladruby Monastery is one of the most critical settings in the film and is laden with small doors laced in a Gothic-Baroque style that adds suspense. Architecture and entrances are fundamental parts of the movie’s eerie tone that include Liev Schreber walking in and out of doors and darkly lit rooms, which successfully adds to the film’s tone of terror.

4. The Shining Chops Doors Down to Size

Any door can be made terrifying, especially when a psycho chops through it with an ax. The wooden door that Jack Nicholson’s character (Jack Torrence) bursts open is not particularly creepy and is almost the type of door you might see in a country house. The vibrant coloring and setting make the scene even more frightening as an unhinged Nicholson can no longer contain his murderous instincts.

The interior hotel rooms in this 1980 cult classic were constructed on a soundstage in Hertfordshire, England. The rooms were based on the design of the Ahwahnee Hotel in Yosemite National Park, California. After watching this movie, it’s guaranteed that if you’re offered room number 217 at a hotel, you’ll politely pass.

5. The Dark Door in The Woman in Black Would Scare Anyone Away

The infamous Gothic-style Cotterstock Hall located in the village of Cotterstock in Northamptonshire, England, has a door shrouded by a dark hall that makes entry to this 365-year-old establishment a daunting task. The melancholy Arthur Kipps (Daniel Radcliffe) is hesitant to walk through the house’s dark doors and into the path of a ghost.

Cotterstock Hall was transformed into the Eel Marsh House, which serves as the perfect setting for the film. It’s a wonder what fog, moss, and a little ivy can do to set the scene for the perfect ghost story.

6. Space Ships Can Have Creepy Doors Too

Waiting to see what’s behind the numerous metal doors on the spaceship from the 2017 horror film Alien: Covenant will make you jump out of your skin repeatedly. The USCSS Covenant spaceship that serves as the backdrop for the film is designed with interstellar spook that puts a new perspective on creepy doors. Marvelously low lit hallways and flickering lights set the scene for killer aliens perfectly.

The sound effect for the AI-powered doors triggers a reaction along with the speed that they close. The doors with windows capture character emotion and the rabid aliens that are hunting them. Doors are a big part of this film and spaceship doors also tend to malfunction when killer aliens are on board.

7. The Ultimate Creepy Door Will Lead You to the Unknown

The scariest door to walk through in the universe is most definitely the Stargate from the 1994 film. Once Egyptologist and linguist Daniel Jackson, Ph.D. (James Spader) figures out the spatial coordinates to the Stargate, a team marches into the unknown and ends up in a pyramid on a distant planet. The group slowly realizes that the Egyptian god, Ra is an alien life form that possesses human bodies.

If you are looking for a maximum scare session, the scariest episode ever is Stargate Atlantis season 5, episode 7 called “Whispers.” If screaming sounds made by Iratus bug hybrids and death mist don’t do it for you, then nothing will.