Lighting the Way: From Cave Walls to Modern Day 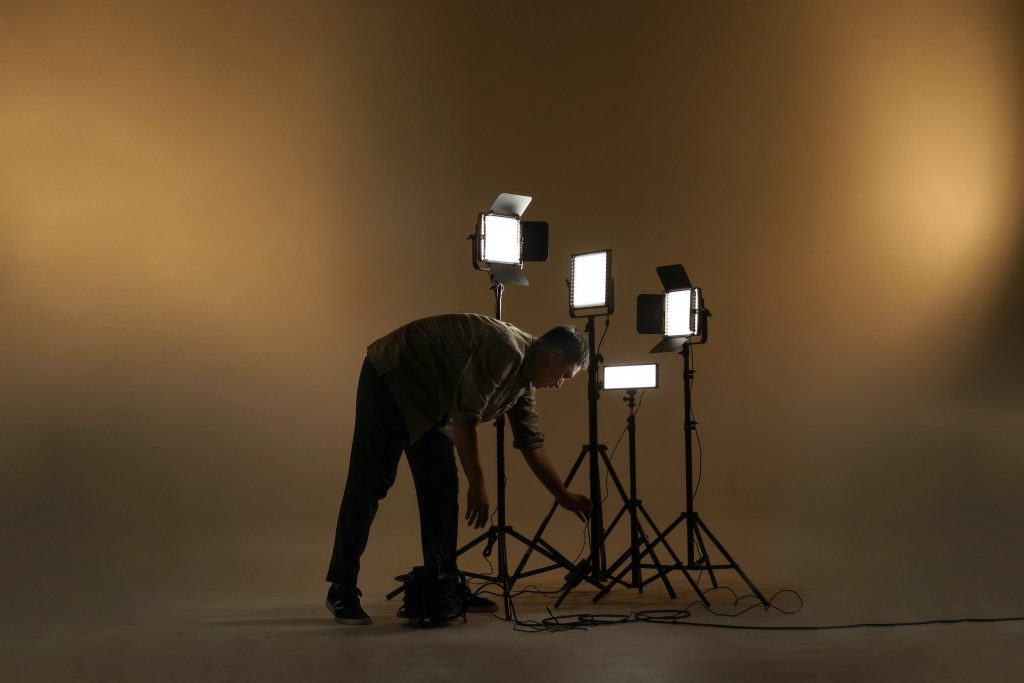 Lighting the Way: From Cave Walls to Modern Day

Approaching a blog post about lighting, this hyphenate video content creating guy’s impulse is to begin with the first lights used for the first films and proceed safely from there. However,  the right starting point might not be the first film lights but the beginning of the human impulse to produce images influenced by light. The minute there were images on cave walls set against a sun or moon, images with shadows, images in silhouette, we land at perhaps the first moment where lighting played a role in images we looked at, and in how we interpreted them.

Stopping by Touropia you can see a collection of images from caves around the world going back tens of thousands of years. According to the article the “Sistine Chapel” of cave paintings are at the Lascaux Caves in Southwestern France. The cave paintings date back 17,000 years, and they were drawn deep in the cave where lighting would have been needed. So, both in the silhouetted figures depicted on the walls, the drop shadow to give perspective and even in the fire or candlelight used to see while composing the images, the work was influenced by light and certainly a valid first stop on our tour of lighting.

Moving on to the age of painting and the Renaissance in particular (1400-1550) we begin to see the use of light to do everything like giving physical perspective, to interpretation of faces, suggesting mood, and so many aspects of how we think and feel when presented with images for visual interpretation. “Rembrandt Lighting” – where shadows and minimal light produce an almost triangular shadow across a subject’s face, is still a term and style used in today’s lighting setups. It is an homage to the style of the great Dutch master Rembrandt van Rijn, who painted in the early to middle 1600’s. Here’s a link for more information.

The First Photographic Images get moving:

From the early images that moved us to moving images themselves, we land at the meat and potatoes of any look at lighting: early techniques in lighting moving pictures.

At the birth of film photography, the film used was very slow. That’s why we see stiff old-timey picture poses they had to hold still long enough for the image to expose.

Fast forward to the late 1800’s and we see film becoming fast enough to expose frames quickly and stitch together movement…and, voila, we have moving pictures!

In 1893, Thomas Edison opened the world’s first film production studio, the Black Maria, in New Jersey. Since the sun was still the only light bright enough to get film to expose images, the Black Mariah was built with an openable roof that allowed sunlight in. To control the light more precisely, large black curtains were installed. To move the curtains around from the ground level, gaff poles, like the ones used by sailors to get ropes out of the water were employed, and the “Gaffer” was born.

From the early Gaffers moving curtains to control sun in the late 1800’s, we get into the first light fixtures about a decade later with Arc Lights and Mercury Vapor Lights marking a key point in time as the first directional lighting tools. These lights were bright enough to usher in the era of dark studio filming as well.

Now, for anyone who’s sat through a film history course, you know that D.W. Griffith and Cecil B. DeMille are going to be a presence in the birth of filmmaking. These early auteurs whose first films came out in the 1910’s embraced lighting techniques used today, especially the use of soft light, whether diffused or reflected, to make stars look extra pretty. Some say this lead to the “star system” idolizing our screen gods that exists to this day.

As film progressed through the early 20th century, film stock developed along with it. Panchromatic film stock lead to a rise of incandescent lights which drew less power and provided more precise lighting for setting mood in the black and white era.

In the late 40’s and early 50’s, lighting and cinematography starts to break away from black and white epics and high contrast dramatic noirs and move into both color and realism which changes the lighting game significantly. With color, there was less need to pack in lights to differentiate different surfaces and areas of the image, and with the growing popularity of realism and location shooting, setups are scaled back and new approaches begin to take shape as the tone of media and storytelling changed. Deborah Allison describes this key era on the Film Reference Forum:

In the 1960s and 1970s further changes in the dominant lighting styles of American cinema derived their main influences from trends in European filmmaking. The films of the French New Wave and, in particular, the work of the cinematographer Raoul Coutard (b.1924), proved especially influential. Coutard first used his trademark technique of “bounced light” when photographing Jean-Luc Godard’s Le Petit Soldat (1963). It entailed directing photoflood lights toward the ceilings of interiors so that a bright, even light was reflected down onto the scene. This technique came to be widely emulated. A contrasting trend of the late 1960s and 1970s saw many color films adopt a darker, more low-key style than had been used in earlier years. This aesthetic was integral to the somber and pessimistic tone of the narratives that flourished in this era, and Bruce Surtees’s work for Eastwood can be seen to typify this vogue.

Are we finally at the age of modern lighting? Yes, because we see HMI’s going toe to toe with the sun.

HMI’s – let the sunlight in! The HMI is a type of arc lamp centered on halogen gas enclosed within quartz. The light it emits is the same color temperature as the sun, and plenty powerful. If you’re reading this, chances are you already knew that. Once these bright and relatively portable lights became more commonplace and coincided with the rise of video as the dominant medium for image capture, we were able to balance out interiors with daylight and light more effectively in outdoor settings as well. While still a bit spendy, the HMI with its stalwart “Joker” are certainly the light most commonly used in outdoor settings and to balance out daylight in indoor setups.

Fluorescents and LED Panels – The future is here.

I think anyone working in video remembers clearly when Kino Flo’s came on the scene and became a regular fixture on shoots big and small to this day. Their weight, portability and ability to use daylight and/or tungsten tubes was a game changer of soft, flattering light.

The recent LED flat panels and fixtures emitting dimmable light with adjustable color temperatures across the spectrum have become a game changer. Coupled with programmable modes, battery capabilities, ability to control remotely, and rapidly increasing brightness at lower prices, we are in an age of change in lighting fixtures and technology. New techniques around shaping these light sources are emerging, and new products are coming fast.

That brings us to “Modern Day” in the lighting game. Stay tuned for our next entry on lighting – an in-depth look at all the current gear and techniques shaping the game today.