Measure of a Man Movie Review 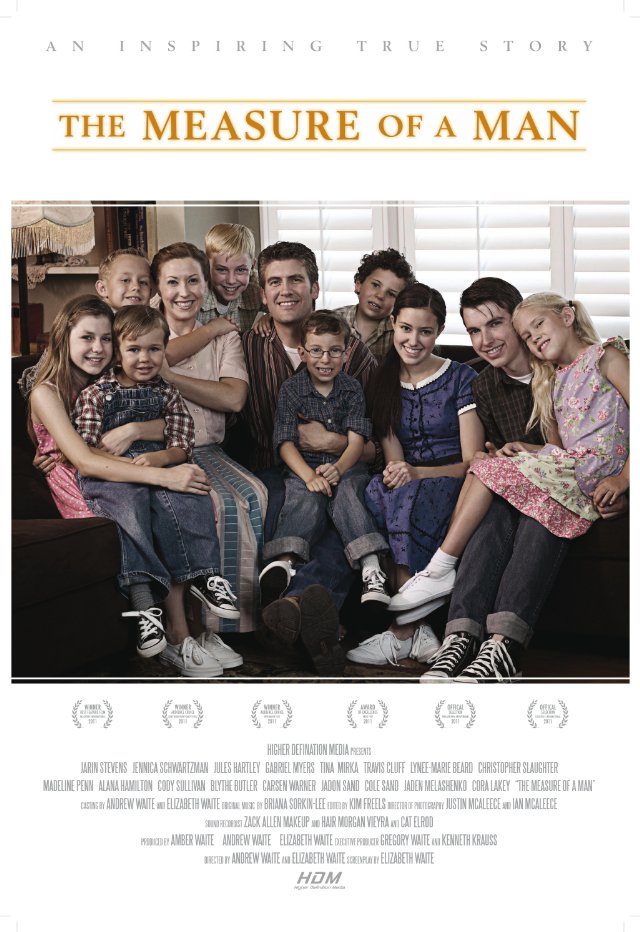 What better inspiration for a film than the life of a real person and that’s just what screenwriter Elizabeth Waite has done with the film THE MEASURE OF A MAN. The film is an inspirational family film about Donald P. Bailey (Jarin Stevens) and his life raising nine children with his dedicated wife Emogene (Jennica Schwartzman). Donald’s life wasn’t always easy as he was forced to grow up fast at the age of 15 when he fled the confines of an orphanage in order to find a new way of life in California in the late ’30s and early ’40s. The film is narrated SEX & THE CITY style by his youngest daughter Elizabeth (Jules Hartley) also known as Lizzy by the rest of the family. Lizzy tells her father’s story “matter of fact” delving into his early childhood but focusing more on how he and Emogene first met and ultimately married bringing into the world nine children. Now this story may seem like a light hearted version of “Cheaper by the Dozen” and it does curb a lot from that story especially in its wholesome look at family life and the childlike mannerisms but what truly makes you believe in Donald and his family is the way in which he uses everyday music to bind his life and family together. This is not a musical by any stretch of the imagination but music and song does bring out the real life Donald making him a character unlike any other. In early scenes when no one is looking Donald has a very whimsical look at breaking out into song simply because it seems to be the right moment, despite the fact that around every corner a stranger or co-worker is just within earshot. Donald teaches his children that every moment has a song and every song has a moment and this allows the audience to delve deeper into all of the characters and this film has a lot of characters. Waite’s screenplay makes it very easy to distinguish one character from another and the cast is equally capable as the film is filled with real characters and not “caricatures.”

Despite the very predictable plot of the film, the lives of the Bailey family revolves around how they handle the day to day chores while also experiencing the weekly family meetings, the family’s pet sheep, family outings, work, school life, and even Donald’s own impending death. The trick isn’t providing a plot that hasn’t been done before, the trick is providing a story that the audience doesn’t seem like they’ve seen before and directors Elizabeth and her husband Andrew do it without a single problem. I guess it comes easy when you have a real person to draw from.

Praise must also go to the cinematography of Ian & Justin McAleece who make every frame of the film something to behold which isn’t easy considering that the majority of the film takes place within a single house. Of particular interest is an early scene in the film in which Donald and Emogene take the kids out on a picnic on a mountain in which Donald breaks out in song as if he was in the middle of THE SOUND OF MUSIC. Music and song is the lifeblood of a happy and fulfilling life and it is never more effective than in this scene. Despite all the characters and the possibility that the frame could get too crowded the McAleece brothers create an ambience of wide open spaces giving the film the sense that it can have a wider impact than just a single household.

Herein lays the beauty of the film. Despite the relatively small and crowed nature of the story on the surface, the film teaches us that one man can have a profound effect on the masses whether it is his children, his grandchildren, or his grandchildren’s children and that is truly what Elizabeth is trying to say about Donald P. Bailey.