WHAT CAMERA DO I NEED TO BECOME A FILMMAKER? 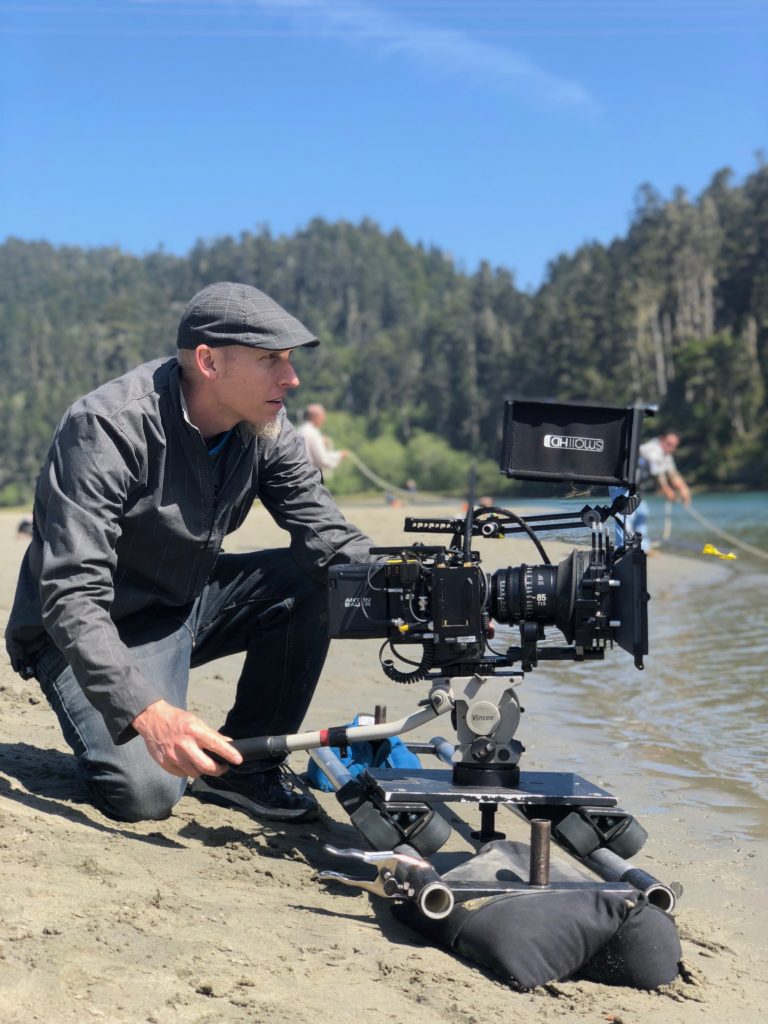 WHAT CAMERA DO I NEED TO BECOME A FILMMAKER?

THE DAWN OF FILM

In 1888 Louis Le Prince recorded four revelers dancing in what many believe is the world’s oldest surviving film – a three-second clip – commonly referred to as the “Roundhay Garden Scene.”

In 1894, Thomas Edison introduced an early motion-picture device in which the moving pictures were viewed through a peephole. Once his “Kinetoscope,” caught the eyes of Auguste and Louis Lumière, the French inventors were inspired to take the films out of Edison’s box and present them to a wider audience.

A year later, at a Parisian science conference, the Lumière Brothers exhibited their newest invention, the “Cinematograph,” a combination of a film camera that doubled as a projector and before long, more than 450 portable Cinematographs were built and deployed around the world.

Within little more than a dozen years from Louis Le Prince filming his “Roundhay Garden Scene,” French filmmaker Georges Méliès managed to produce the world’s first science fiction movie. An adaptation of a Jules Verne novel, in which his famous rocket ship plants itself squarely into the face of the moon: Once “Le Voyage dans la Lune” was first screened for audiences in 1902, the “liveliest art” was born.

Since then, the film industry has stayed busy innovating to make better films by developing increasingly more sophisticated technology, and getting its pictures seen by wider and wider audiences.

FILM FOR THE MOTION PICTURE CAMERA

Whether we’re talking about black & white or color, since 1909 the standard film format for movie cameras has been Academy 35mm. With an aspect ratio of 1.375:1, four perforations per frame and, in 1926 a sound recording stripe printed directly onto the film, Academy 35 has become the internationally recognized standard gauge for filmmakers throughout the 20th Century and beyond.

Academy 35 remained the primary film format until the early 1950s when an exciting, new era in technology emerged in homes across America and the sale of tickets to see movies in theaters plummeted.

In order to compete successfully with television, movie studios scrambled to develop new film technologies that would one-up the small, black and white cathode-ray picture tube and lure their lost viewers back into theaters.

What 20th Century-Fox introduced in 1953 was a more spectacular movie going experience. When CinemaScope arrived in theaters with the sole purpose of beating “the tube,” audiences and studio executives alike were thrilled.

So far we’ve only discussed Academy 35mm film with it’s close-to-square 1.375:1 aspect ratio. It’s helpful to understand that Academy 35 was filmed and projected largely with the use of modern spherical lenses, which provide filmmakers with the most lifelike look for a picture.

Spherical lenses are simple mechanically requiring less glass for light to travel through, so they tend to produce sharper images with less distortion and cost than more complex anamorphic lenses. But to understand the development of widescreen, or letterbox as it’s often called, we need to learn a bit about the use of anamorphic lenses.

During the First World War, French crews had difficulty observing enemy actions from inside their tanks. The solution was to attach anamorphic lenses to their periscopes in order to distort the image sufficiently to gather a wider field of view of the battlefield.

This distortion proved useful in combat but filmmakers soon saw another potential and began using anamorphic lenses to give their pictures a more stylized, dramatic appearance. For movie studios, anxious to put butts in seats however, a stylized look alone wasn’t going to cut it. Rather, a dramatic increase in the width of the screen and the picture projected onto it was what was required.

CINEMASCOPE AND THE BIG PICTURE

CinemaScope is a process that distorts and squeezes an image horizontally by filming it through an anamorphic lens so the compressed image fits neatly into the 35mm film’s nearly square frame. Then, by using an anamorphic projection lens, the image is unsqueezed, allowing the full width of the picture to be projected onto the new wider screens. It was an innovation that gave audiences what they wanted, a more immersive viewing experience, while keeping faith with the original 35mm film format studios and theater owners favored. Suddenly, movies were back in business! https://www.studiobinder.com/blog/what-is-cinemascope/

Eventually a 70 mm film format was developed but it has been widely considered a specialty format, better suited for filming spectacular epics and nature films than day-in, day-out filmmaking so its application has been limited.

While directors still shoot features on original 35mm and 70mm film stock, digital video cameras and projection have emerged to replicate these early film formats and are becoming wildly popular with filmmakers the world over.

Indeed, many of the image sensors standing-in now for motion picture film shares the original 35mm dimensions. These are called full-frame sensors, and are very close in size to another format, APS-C sensors. It may be useful to understand there are many good digital video cameras with sensors that are considerably larger and smaller than full-frame, such as the increasingly popular micro four-thirds (MFT) sensors.

A WORD ABOUT SENSORS

Regardless of its size, the image sensor at the heart of a digital camera is a solid-state photoelectric device containing up to millions of photodetector sites called pixels. They work by converting an optical image into a sequence of electrical signals to record a digital image onto an SD card or an external hard drive.

The size of the camera’s sensor can have dramatic effect on the image produced and the lenses you may need to achieve those looks. But also note that the size of the sensor has little to do with its resolution. However, a larger sensor can provide for larger receptors, which can produce cleaner images with better low light capabilities. There are many standard area-scan sensor sizes available so some research will be in order.

CHOOSING THE BEST DIGITAL CAMERA FOR YOU

The most critical component of what you’ll need to make any film is the camera and choosing a camera that will work best for you involves a clear understanding of the functions your camera must serve. Once you commit to the kind of work you will be producing, along with an idea of how much you have to spend, you can start thinking about the type of camera and lenses system you’ll need.

The most obvious advantage to a camcorder is its flexibility: You can simply pick up the camera and start shooting. Thanks to a built-in zoom lens, swapping lenses is unnecessary so you can to change your perspective and compositions very quickly. Another advantage that comes with most camcorders is they have good image stabilization, which makes them much less challenging to shoot handheld.

The Achilles’ heels of camcorders is the poorer quality of a fixed zoom lens and the smaller sensors, which makes perform them marginally in lower light situations.

On the other hand, if your goal is to make movies that can be entered into film festivals and screened in theaters for paying audiences, a good digital cinema camera with a set of prime lenses will probably be your best bet.

When it comes to choosing a camera there are many options, so spend some time researching which cameras and lenses might work best for you and your budget. Professional digital cameras can range widely in price – for instance, on the high end a RED Ranger Monstro 8k Full-Frame CMOS Sensor comes in at $60,000. https://www.bhphotovideo.com/c/product/1559614-REG/red_digital_cinema_710_0336_red_ranger_monstro_8k.html
On the lower side, a Panasonic Lumix DC-GH5S Mirrorless Micro Four Thirds Digital Camera, modestly priced at just $2,300 is a value. Note that these prices are for the camera-bodies alone, without any lenses.

The important thing to remember is that filmmakers can get professional quality results without an enormous price tag. So do your homework and hopefully it will pay off. https://www.studiobinder.com/blog/best-video-cameras/

The Four-Thirds System is a standard for Digital Single-Lens Reflex (DSLR) cameras like the Panasonic GH-5S previously mentioned.

All mirrorless cameras feature a digital camera body made without an optical reflex mirror, which allows light to pass straight through a lens to a sensor with a size equivalent to a 4/3-inch video tube (archaic reference.) The smaller-than-full-frame sensor has other advantages as well.

By doing away with the mirror box, manufacturers were able to introduce the Micro format to make smaller cameras with a shallower lens mount “helping to pioneer the mirrorless genre of interchangeable-lens camera systems.”

Besides being smaller, these mirrorless, Micro four-thirds cameras are often less expensive and come with a greater depth of field, making the image appear more “cinematic” and less videoesque than other video cameras. MFT cameras also offer a wider range of lens options.

Earlier in this blog we discussed the difference between spherical lenses, with less glass for light to pass through, and anamorphic lenses, that provide a unique, cinematic look by changing the dimensions of an image in an axis.

Just like their use with CinemaScope, anamorphic lenses take in a wider field of view and squeeze the image onto a smaller sensor. This maximizes the sensor by squeezing on more data however, the image must be stretched back in post-production or when it’s projected or it will appear distorted.

Also note that smaller-than-full-frame or APS-C sensors are often called “crop sensors,” referring to the crop factor, which must be calculated to determine how much smaller the sensor is than a full-frame (35mm) sensor and how that sensor’s reduced size will change the focal length of the lens you attach to the camera.

For example, a 18mm lens on a camera with a crop factor of 1.6 will have the same field of view as a 29mm lens on a full frame 35mm still camera. Check out this useful PDF from Panavision to understand the best use of lenses with different sensor sizes and how to calculate the crop factor.

We’re nearing the end. Prime lenses have been around longer than zoom lenses but their main advantages are basically in cost and weight. A less expensive prime can generally provide an image quality equal to or better than a more expensive zoom. This is because primes are better in low-light situations, since they generally offer greater light-gathering capability due to a larger maximum aperture. More light hitting the sensor gives the prime lens its “prime” advantage.

There’s still a lot to learn about the differences between cameras and lenses so a great place to start is by doing your own Google searches but only, once again, after you’ve determined exactly how you’ll be using your camera system and the finances you have available to support it. So go get ‘em, Tiger and good luck!