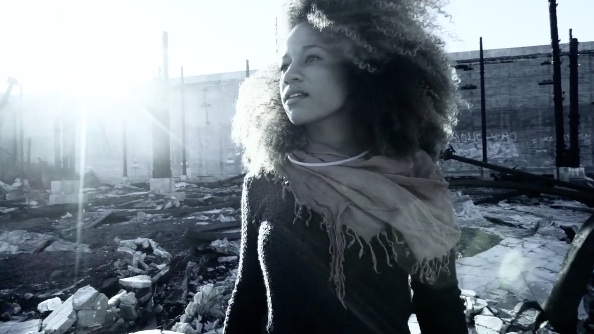 The basic premise while shooting a music video to look like the big boys is variety.

As far as technical details go, the first thing you’ll need is a stereo with the actual track being used in the video. Remember that all performance shots need to have band members singing/ playing/moving with the music. Make sure the singers actually sing. Make them belt it out karaoke style to their own song. You must use the prerecorded album track or shorter, edited, music video track. Never let them just perform though without playback. It’s a nightmare to edit.  Doing the whole song is an easy and safe way to give yourself plenty of footage for editing, but don’t waste time shooting the beginning of the song for a location that you know will never appear until the end of the video.

If you have the choice between doing another take and moving your shot to get an alternate, it’s always best to get the alternative. You’ll almost never need more than two or three takes of a performance unless the performers are flat or the camera moves aren’t ideal. You’ll usually be able to edit around poor performances with more visual variety. You’ll rarely be able to use all the good performances you have anyway so it’s better to ensure that you’ll have a lot of options in your editing patterns.

Chances are that you want at least three angles of two scenes each per verse. You want probably three or four additional setups which could be from a scene or two to carry you through the hooks/chorus. This is just for performance and is separate from any of the story elements that you are trying to insert.

Locations and wardrobe are important.  Outrageous is usually better than bland. It’s a music video not a movie. You can go big and a little bizarre and it will usually pay off. (This does depend on the type of song/genre though). Think of the most memorable videos you know of and then think about how many times they “played it safe.”

The important thing to remember is that you want to alternate the size and feel of the shots quite a bit. For example, go wide then tight then medium then slo-mo then back to wide then to tight. Have them perform facing to the left then to the right. Have them front lit and well exposed then cut to a silhouetted shot. You’ll notice that this is how most videos go. For a performance based video these are the “rules.” Get good at them before you decide to break them.

You’ll normally start off with some slo-mo (over cranked) b-roll type shots with the people looking into the camera or looking down/preparing/focusing/thinking. You want the first fifteen seconds to feel like a prelude to the first time you cut to the lead singer doing the vocals which will happen right at the first words that are sung. It’s always better to cut right to it. Never start the vocals by showing the drummer, etc…

If you can incorporate a storyline, try to keep it simple at first. When you get really comfortable you can branch out, but start simple. Boy sees girl, her current boyfriend is a jerk, boy meets girl, boy saves girl, boy and girl end up on a great new adventure. Something like that can be more than enough. Don’t try to do too much unless you’re sure that you can pull it off. The storyline will have to be hinted at in the start and then weave its way throughout the performances.

As you edit, try to move from one set of locations to the next. Like I said in the beginning, each verse/hook combo should have its own location so that it seems like you’re going somewhere when the song changes to the next verse. Never edit through every location you have in the first verse. You’ll have nowhere to go and the video will quickly feel stagnant no matter how short it is.

In the end it’s about variety and experimentation. Have fun! Fight for your shots and fight for a good, simple story that works well.

Here’s a video I did last year that I’m really happy with. The story is pretty simple, but the camera is always moving and there are lots of interesting locations/wardrobe.